Generally, I don’t get to hear negative statements about myself. Naaa, It’s not because I am so good that people don’t get a chance to pass their precious comments about me – Nope, not at all! lol. The reason is that I totally avoid such toxic, judgmental, I-know-it-all kinda peeps… trust me this is the best way to dodge away those pessimistic statements and lead a happy care-free life.

However, there are days when you are bound to get scrutinized by people from such shitty mentality clan and you can’t help it. Not only women but men are also found in equal numbers in the said group. This world is full of such ‘educated-ignorant’ people who in their limited capacity think that working only corresponds to a full time professional job, anything less than that cannot be characterized as work.

I have been through a similar situation once when a ‘man’ was trying to joke about my work by saying ‘ap kuch nhi kertein‘ (you don’t do anything’) even after telling him that I look after the house, kid and write blogs his smirk remained unchanged to which I don’t give a damn, obviously. May be he was attempting to justify (in his mind) the fact that his wife works and shares the load. May Allah bless him and such ‘sick’ people with mental health soon. Aamin

Although, there has been a lot of discussion on the topic and the internet is full of articles. But still, people are not willing to recognize the efforts a woman does if she chooses to stay at home for her family. For them, if a woman is not doing a 9 to 5 job she is having a ball by doing absolutely nothing. In their wild imagination she spends her whole day sitting on the couch in front of the TV with a cup of tea and mobile phone in her hands or is presumably shopping and partying around with her friends all day long. Isn’t it so? 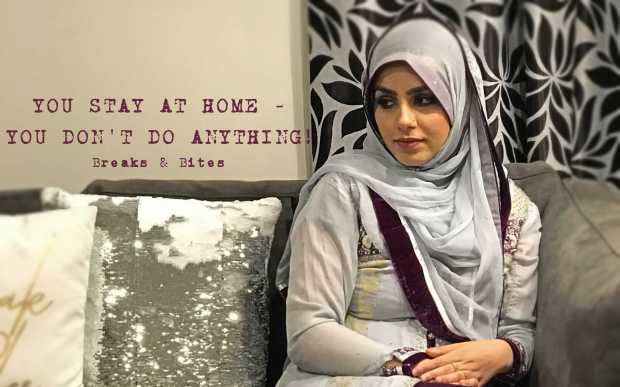 Dear judgmental blockhead, first of all you are not responsible – I repeat in ANY WAY no one to decide what a woman should do or not. If a woman abandons her career and stays at home:

I am not saying that a working woman is not a good parent or a woman only works if her husband pressurizes her to do so. I was a working woman before I got married and I had to manage household chores for about a month when my Ammi went on Hajj. I must admit that it was the hardest phase. Been there done that, Salute to all working women who juggle between all the tasks so brilliantly.

All I am trying to state here is; we live in a FREE society, No one has the right to joke about or look down upon anyone on the basis of their working priorities. Let people (read women) decide what they want to do with their life. Let them fly and dream on their own. For God’s sake, Let them be happy.

HER LIFE – HER CHOICE!